The research activities of the Space Tether Group (STG) are focussed on tether modelling, design and analysis of new concepts and missions, dynamics, and new materials for tether applications. The members of the group have more than 10 years of experience on the subject and have participated in several National and European projects, they include the FP7/Space project BETs and the H2020 FET-OPEN project E.T.PACK, which the STG currently coordinates.The STG is part of an European consortium that will develop within the next few years a deorbit kit for post-mission disposal of satellites with TRL 4 based on electrodynamic tether technology. In 2019, STG hosted the Sixth International Conference on Tethers in Space (TiS2019).
The STG is specialized in electrodynamics tethers and the modeling of its interaction with the ambient plasma. Previous and on-going works include a variety of topics like nonlinear wave excitation by using electrodynamic tethers, modelling of current collection and emission using kinetic eulerian solvers, mitigation of dynamic instabilities, optimal mission design in deorbiting scenarios, and a disruptive subclass of electrodynamic tether named the low work-function tether (LWT). Recently, the group has started a new line of research on thermionic materials applied to LWTs and plasma diagnostics.

The STG has developed BETsMA, a friendly software for the preliminary design and analysis of deorbiting missions by using electrodynamic tethers. The code has two modules. The Optimization Module implements the π-algorithm and can be used to find the optimal tether length, width and thickness for a given mission (spacecraft mass and elements of the initial orbit). The Deorbiting Module computes, for a given tether geometry, the deorbiting maneuver and provides key quantities like the deorbit time, and the temporal evolution of the orbital elements, average and maximum electric current, tether temperature and forces, etc. BETsMA v1.0 was developed under the European Commission FP7 Space Project Propellantless deorbiting of Space Debris by bare electrodynamic tethers (BETs, 262972). Its physical models, performance, and result analysis have been upgraded in BETsMA v2.0, which can also simulate low Work-function tethers with different type of cross-sections, tether attitude dynamics, thermal analysis, and contains many others new capabilities. BETsMA v2.0 has been developed, and will be improved within the next few years, under the European Commission H2020 FET Open project Electrodynamic Tether Technology for Passive Consumable-less Deorbit Kit (E.T.PACK, 828902). 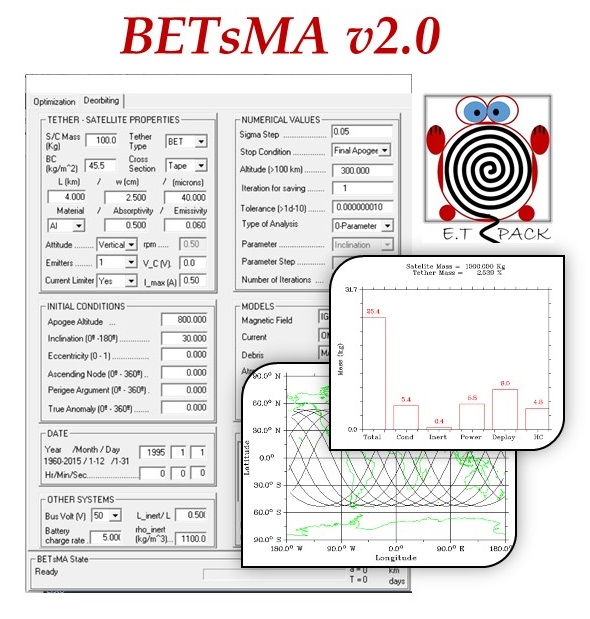 The STG has developed simulators of different complexity to study the dynamics of space tethers and has used them to study several tether applications like stalleite deorbiting at the end of life, drag compensation scenarios, among others. It has also expertise on modelling advanced and non-conventional tether concepts. The animation in the right hand side shows the dynamics of a Low Work-Function Tether with a loop shape orbiting in equatorial orbit and the corresponding Poincare section.

The STG has background on key topics of plasma physics related to electrodynamic tethers like Langmuir and emissive probe theory and nonlinear wave propagation in magnetized plasmas. The correct modelling of the charge exchange with the plasma is critical for bare tethers because current and voltage profiles along the tether impact on tether performance and dynamics. The group has developed a suit of Vlasov-Poisson solvers that allow a kinetic analysis of the plasma sheath around tethers and the determination of the current collected and emitted by bare and coated tethers. The suit has currently three tools: